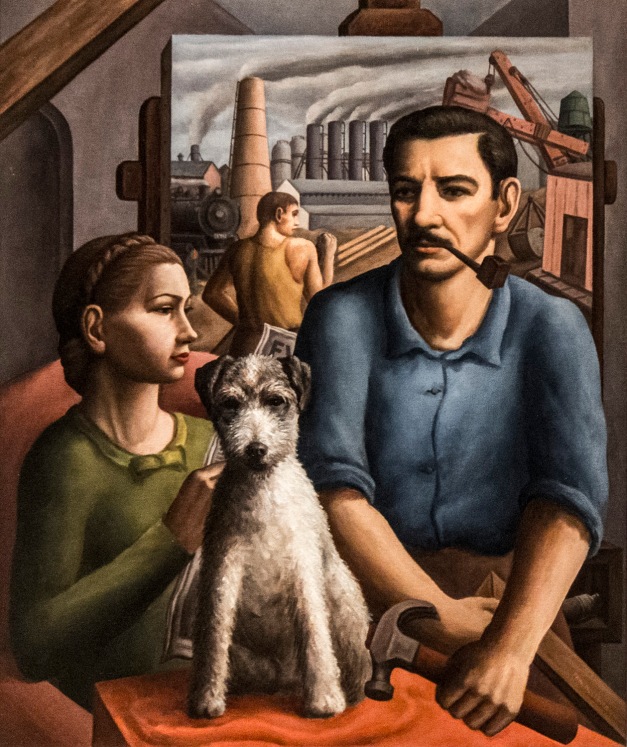 “In 1937, Meltsner painted a self-portrait titled Paul, Marcella and Van Gogh. The painting was purchased by the Luxembourg Museum in Paris, but during the German occupation of France, it was confiscated by the Nazis because Meltsner was Jewish. He painted a copy of the work in 1940, and Paul, Marcella and Van Gogh (No. 2) now hangs in the Nelson-Atkins Museum of Art in Kansas City.

This self-portrait by New Yorker Paul Meltsner features not only likenesses of his stately wife and charming wire-haired terrier, Van Gogh, but also a view of one of the artist’s industrial scenes, which brought him considerable fame in the 1930s. Holding a hammer instead of a typical brush and palette, Meltsner expresses identification with workers like the one included in the painting behind him. The composition’s smooth and volumetric forms, which appear like products of an assembly line, tie Melstner more subtly to proletarianism, a celebration of workers’ culture that attracted many American artists throughout the period. Melstner’s style translated easily and successfully into the widely accessible medium of printmaking, a pursuit that further strengthened his affiliation with 1930s proletarianism.”

5 comments on “Labor of Love”