The Boy Who Became a Robin

The Boy Who Became a Robin
by Henry R. Schoolcraft
The Myth of Hiawatha

Once upon a time there was an old Indian who had an only son, whose name was Opeechee. The boy had come to the age when every Indian lad makes a long fast, in order to secure a Spirit to be his guardian for life.  Now, the old man was very proud, and he wished his son to fast longer than other boys, and to become a greater warrior than all others. So he directed him to prepare with solemn ceremonies for the fast.

After the boy had been in the sweating lodge and bath several times, his father commanded him to lie down upon a clean mat, in a little lodge apart from the rest.  “My son,” said he, “endure your hunger like a man, and at the end of TWELVE DAYS, you shall receive food and a blessing from my hands.” 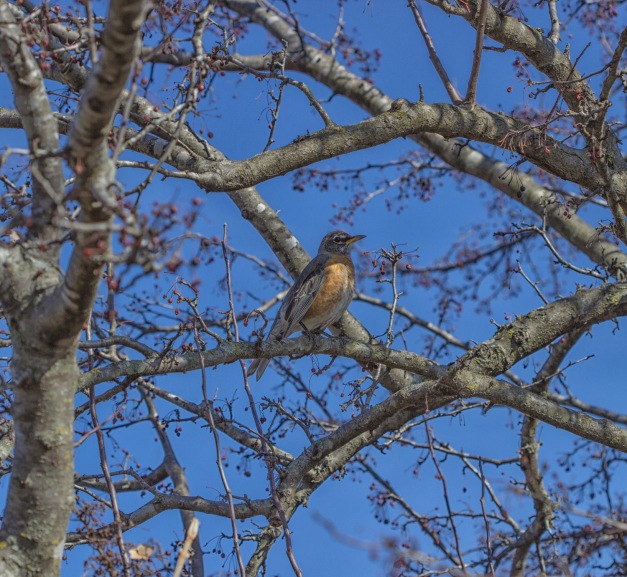 The boy carefully did all that his father commanded, and lay quietly with his face covered, awaiting the arrival of his guardian Spirit who was to bring him good or bad dreams.  His father visited him every day, encouraging him to endure with patience the pangs of hunger and thirst. He told him of the honor and renown that would be his if he continued his fast to the end of the twelve days.

To all this the boy replied not, but lay on his mat without a murmur of discontent, until the ninth day – when he said,  “My father, the dreams tell me of evil. May I break my fast now, and at a better time make a new one?”

“My son,” replied the old man, “you know not what you ask. If you get up now, all your glory will depart. Wait patiently a little longer. You have but three days more to fast, then glory and honor will be yours.”

The boy said nothing more, but, covering himself closer, he lay until the eleventh day, when he spoke again,  “My father,” said he, “the dreams forebode evil. May I break my fast now, and at a better time make a new one?”

“My son,” replied the old man again, “you know not what you ask. Wait patiently a little longer. You have but one more day to fast. Tomorrow I will myself prepare a meal and bring it to you.”

The boy remained silent, beneath his covering, and motionless except for the gentle heaving of his breast.  Early the next morning his father, overjoyed at having gained his end, prepared some food. He took it and hastened to the lodge intending to set it before his son.  On coming to the door of the lodge what was his surprise to hear the boy talking to some one. He lifted the curtain hanging before the doorway, and looking in saw his son painting his breast with vermilion. And as the lad laid on the bright color as far back on his shoulders as he could reach, he was saying to himself:

“My father has destroyed my fortune as a man. He would not listen to my requests. I shall be happy forever, because I was obedient to my parent – but he shall suffer. My guardian Spirit has given me a new form, and now I must go!”

At this his father rushed into the lodge, crying,  “My son! my son! I pray you leave me not!”

But the boy, with the quickness of a bird, flew to the top of the lodge, and perching upon the highest pole, was instantly changed into a most beautiful robin redbreast.

He looked down on his father with pity in his eyes, and said,  “Do not sorrow, O my father, I am no longer your boy, but Opeechee the robin. I shall always be a friend to men, and live near their dwellings. I shall ever be happy and content. Every day will I sing you songs of joy. The mountains and fields yield me food. My pathway is in the bright air.”  Then Opeechee the robin stretched himself as if delighting in his new wings, and caroling his sweetest song, he flew away to the near-by trees.

10 comments on “The Boy Who Became a Robin”